These are notes I made regarding installing the optional TCP/IP v4.1 for W4.  Feel free to send me comments on my choices or omissions.

Background:
IBM made the optional TCP/IP v4.1 package freely available to the public for a few days, then withdrew it and made it available only as an added-cost option.  It is no longer available from IBM at any price, and has been supplanted by the v4.3 package.  Although it is possible to upgrade the W4 GA TCP/IP stack from 16-bit to 32-bit, adding the v4.1 or higher package remains the only way to add the 32-bit applications.

Prerequisites to installing TCP/IP v4.1
The installer requires:
Netscape Navigator (AFAIK; email me if this is incorrect);
IBM Feature Installer to work with Navigator;
Java

I recommend that you get these installed & updated before proceeding.
Netscape
Feature Installer
Java 1.1.8

Reboot, then delete the the files and dirs created by DSKXTRCT.

MPTS 8621 (MPTS update for use with TCP/IP v4.1 only) (from Al's server ) (from IBM ftp ) via Fastkick/DIUNPACK & run "FIX.cmd" (use DIUNPACK.exe instead of DSKXTRCT.exe)
Brings the TCP/IP stack up to 6.2004/6.2000/6.2013 (as reported by INETVER.exe).
This updates the stack, but not the apps.
If you didn't delete the extracted files from installing MPTS8610 above,
their locations will show up on the "Serviceable Products" list, and you'll
need to de-select them prior to letting CSF apply 8621.

Additional instructions from README.tcp on the last diskette:
Unzip \TCPCOEX.ZIP, which has been DSKXTRCTed into the temp dir.
Delete existing x:\TCPIP\BIN\TCPCOEX.EXE file and then copy over the unzipped new TCPCOEX.exe .
[If you forget to do this before rebooting, then the new NSLOOKUP.exe in
x:\MPTN\BIN will get deleted by the old TCPCOEX.exe, and you'll have to manually
unpack and copy it (from the FIX\MPT.1 directory) to x:\MPTN\BIN again.  The
old TCPCOEX.exe will continue to delete the new NSLOOKUP.exe at every boot, until you fix this.
Why the CSF doesn't do this for you is beyond me.]
Delete the old x:\TCPIP\BIN\NSLOOKUP.exe . It won't work with the new stack.

Reboot, then delete the the files and dirs created by DSKXTRCT.

TCP/IP v4.1 Installation package (from Al's server (25mb)), which includes both the 8600-level MPTS (not used) and a separate TCP/IP upgrade installer.

Unzip it in a temp dir, keeping directories intact;
CD to the tcpip dir;
Make certain that all NS components are closed!
Run INSTALL.cmd
[If you've already updated MPTS to 8621, the installation will
proceed with a minimum of intervention.  If you didn't, the installer
will tell you that you have to upgrade MPTS and will offer to do it.  Don't
let it!.  Quit the install and read why.]
Reboot, then delete the extracted TCP/IP v4.1 install files & directory.
Edit CONFIG.sys and remove "SET TMP=x:\TCPIP\TMP" .

TCP/IP v4.1 applications update UN_2001 (from IBM ftp) via Faskkick/DSKXTRCT & run "FIX.cmd".  Updates TCP/IP applications, such as ftp.exe, ftpd.exe, syslogd.exe, tcpcoex.exe, telnet.exe, etc.  Does not change the stack level. IC27255 Fix (from Al's server) (from IBM ftp)
This fixes this problem:
"A trap occurs in afinet.sys after connecting to the internet through a dialer and while bringing down the connection."

Run the self-extracting archive in a temp dir.  Follow the instructions.
Then delete the extracted files from the temp directory.

IC27860 Fix (from Al's server) (from IBM ftp)
This fixes this problem:
"When the file transfer mode is ascii, ftp client and server does not remove '1A'(EOF)."

Run the self-extracting archive in a temp dir.  Copy
ftp.exe
ftpd.exe
to x:\TCPIP\BIN, replacing the old ones already there.  No reboot is necessary.
Then delete the extracted files from the temp directory.

Post-Installation route(s) fix
If you upgraded from the GA TCP/IP 4.0 and had an existing route defined in x:\mptn\bin\setup.cmd, you may find that everything "looks" OK, but it doesn't work.  The syntax of the route command has changed from 4.0 to 4.1, and the upgrade does not always revamp the route command lines correctly.  The easiest "fix" is to use TCPCFG2.cmd to delete the route entry/entries, then redefine them, allowing TCPCFG2.cmd to insert the new route.exe line(s) into setup.cmd, with the new parameter syntax. Problem: Running TCPCFG2.cmd incorrectly prompts for Username & Password when none should be required.

I've found sometimes that after upgrading to v4.1, when running the new Java TCP/IP configuration utility I'm prompted for a Username & Password for a remote configuration, though I'm trying to modify the local configuration. 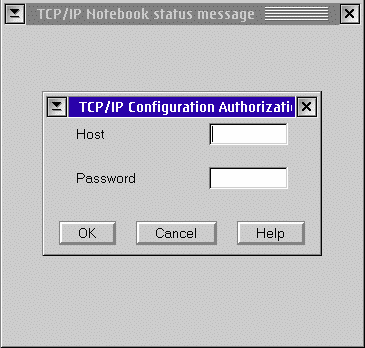 Both the GUI object and manually running TCPCGFG2.cmd yield the same behaviour.  Running the "Remote Configuration" GUI object or TCPCFG2R.cmd works like a local configuration.  This has happened to me several times.  This can be avoided by first upgrading the system's MPTS level to 8610/8621 prior to installing TCP/IP v4.1. Revision History:
30Apr2013
Fixed up HTML to validate properly; no content change.
19-Jul-01
Fixed typo in meta tag "keyword" (missing end quote),
Fixed internal link to #TCPAUTH from text "problem later"
22-Jun-01
Added notes about postfix of route commands in setup.cmd.
10-Apr-01
Added TCPCOEX.exe/NSLOOKUP.exe fix from 8621's README.tcp .
08-Apr-01
Initial release.